These past few days have been pretty fabulous. Im going to apologize in advanced for the length of this post. Since my walk to Leon was so short, I felt like I was on a rest day. I accomplished a few errands independently after arriving in the morning, including purchasing a new global phone, since mine glitched to the point of no return. I spoiled myself with good food and ice cream before headed back to the albergue for my usual afternoon nap. When I woke up, I was surprised to see that the astrology woman with big eyes and long dreadlocks down to her waist was sleeping underneath me. This woman had been keeping pace with us for several days; On her pack she advertised astrology and numerology readings. I took her location underneath my bed as a sign that I needed to take the bait. The Camino is meant for new and different experiences, right?

She consulted with me for an hour and a half, and while I took her much of advice with a grain of salt, some positive things came out the session. For example, she emphasized that I need to start meditating and adopting more yogic practices in order to help me further rely on my intuition. I found it striking how much intuition was emphasized, considering my last blog post was about trusting your gut! I finished my day with a tour of the cathedral and dinner with Melissa and Mandie. The cathedral is famous for its stained glass used to illustrate the stories of Christianity – I attempted to capture a few shots but don’t know how successful I was. 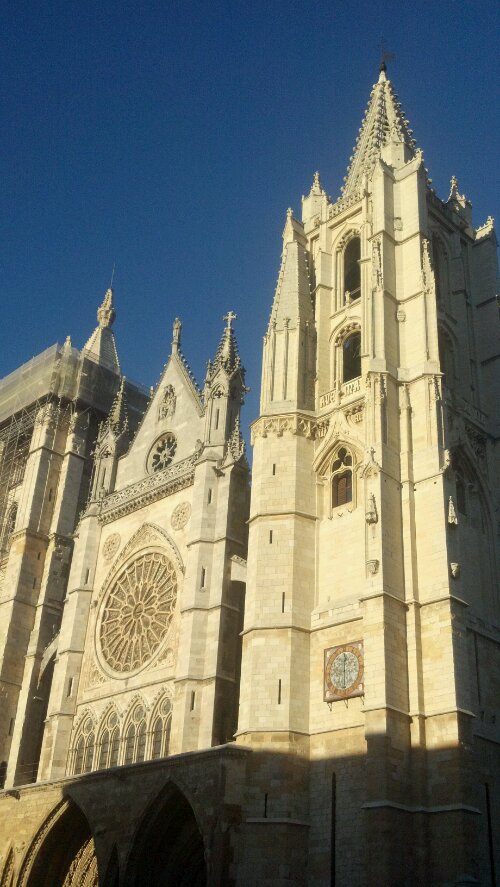 My Tuesday morning departure from Leon marks the entrance into the final third of the Camino. I have less than 300 km to go! Past pilgrims comment that the first leg of the Camino affects the body, the second the mind, and the final, the soul. If I’m going to have any crazy Shirley Mcclaine-esque spiritual visions, this is the time. Fortunately, instead of having visions departing Leon (other than the adorable morning rainbow pictured below), I met a 23 yr old Canadian real estate agent named Shamus at a coffee bar, who was very upset about the lack of sleep he got in the large municipal albergue the night before. 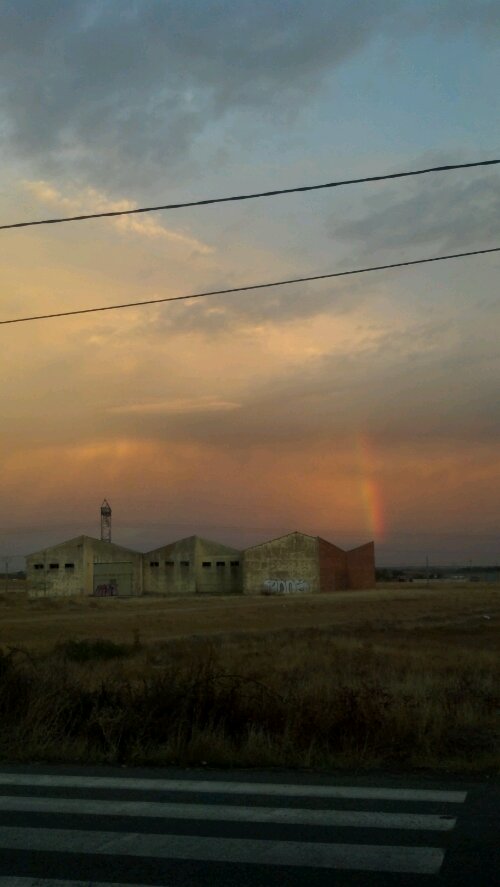 We began to walk together in the final 5k of the day, and both decided to stay in a albergue tucked in the back of Mazarife after seeing a flyer advertising small rooms and free wifi. We sat down for lunch at the bar at the albergue and kept talking over wine through for dinnertime. I didn’t even have time to do my laundry before bed! The beauty of the Camino is that you occasionally meet people where there is little need for precursory small talk.

The very first thing I learned about Shamus was that he got engaged to his fiance 2 months ago and is hopelessly in love with her. For hours we discussed our relationships, our spiritual beliefs, our past and current struggles, and eventual aspirations, laughing frequently. Shamus shared with me that his fiance had introduced him into mediation and yoga, something he thought was totally crazy before he tried it. Born into a large Irish catholic family, Shamus was hugely skeptical, but explained to me that for the past year now he has woken up every morning at 3:50 to go to a yoga/meditation studio, and it has transformed his life. He also mentioned the importance of intuition! Im not sure I am willing to commit to a 4 am Yoga class every morning, but I’ve definitely gotten the message pretty loud and clear that I need to at least start somewhere.

Shamus takes things to extremes – he also aspires to summit Everest and swim with great white sharks, number one and two on his bucket list. When he asked me what was on my bucket list, I stumbled and didn’t know what to say. So, naturally, I spent the majority of my 31k walk today trying to think of a good answer. I think the reason I stumbled was because Shamus’s bucket list is composed of finite achievements; mine is not. Yes, there are some finite things: finish graduate school, go to India to either volunteer, study yoga, trekk, or some combination of all 3; breed and train a horse and keep it until its death; have children who turn out to be good and kind people; die in love. But what is truly at the top of my bucket list is to achieve enough balance in my life to always live with love and laughter and share that love and laughter with others unconditionally no matter what I end up doing with my life. I want to be the kind of person who makes you smile after you talk with them, no matter what the topic conversation or if you are family, friend, client, or stranger. For me, that’s my Everest – it seems like a very tall, but very worthy order, and most likely starts with some type of yoga and/or meditation! Message received! (Hopefully I will listen to myself when I arrive back stateside…)