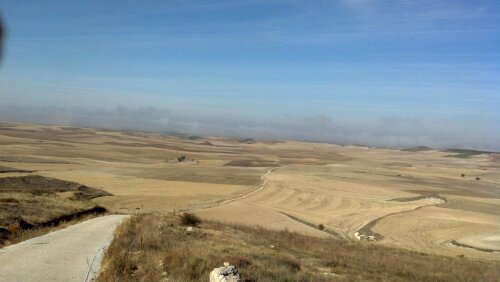 The descent from meseta to the plain.

Our departure from Burgos in fortunately clear, previously rainy, skies marked our entry into the middle third of the Camino.

While  the strenuous climbs of the beginning of the journey were often painful, they were always coupled with novel and breathtaking views. The flat wheat and sunflower fields we have now entered pose a different kind of challenge. While the terrain is not arduous, it is monotonous. (I should note the sunflowers are all dying or already chopped and ploughed for next years season.) Our guidebook describes the pilgrim sendas which run parallel to the highway as “soulless” routes through “featureless” scenery with no shade. It occasionally seems as if we are walking through a desert of dirt and stone. The next village can be spotted several kilometers ahead, tempting us into continuing on, but torturing us with how slowly we approach it. 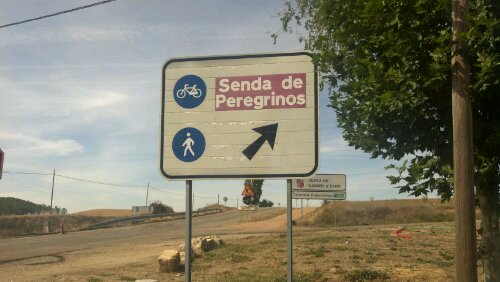 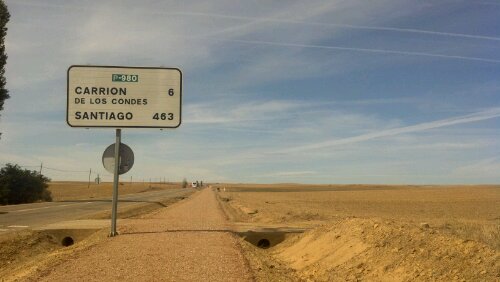 We have been warned of the difficulty of this portion of the Camino.  The Catalonian men Melissa and Mandie had met at the beginning of their travels, who had already completed this section (for it is quite common for Europeans to complete the Camino in sections at a time), said “The Camino is not physical, it is mental.” Entering this section, I feel as though I have started to make the transition from tourista to pilgrim. While we are still meeting new people on a daily basis, the novelty has warn off for both them and us. Waking up in the morning has become a little less exciting and a little more daunting, especially now that we have 5-10 more kilometers each day than before. We discovered in Burgos that we had taken one too many rest days if we wanted to stop in Leon and arrive to Santiago by the 20th, so we have done 4 phases of walking from our guidebook in 3. Fortunately, our bodies are becoming stronger, and we have managed to get into each town by 4 pm each day with no anxiety about finding a bed. Our feet and shoulders still ache by the end of the day, but if they didn’t, we would be doing it wrong.

There are advantages to being a peregrino instead of a tourist. There is great satisfaction in arriving in the intended destination each day knowing that we could have stopped a in the village a few kilometers back or skipped the “ugly” parts of larger towns by hopping in buses or taxis, like several of the other pilgrims we have met along the way. We are trying not to get in a motorized vehicle until we arrive in Santiago, as we believe we would be robbing ourselves of the part of the pilgrim experience.

Other advantages of being a pilgrim includes a distinct ability to enjoy the little things in life. Melissa and I have taken to enjoing the warmth our socks provide our hands early in the cold mornings. Every day without wind or rain is a blessing, and hot showers have become equally as rare as they are heavenly. When you are placed in a room without a snorer, then you know you’ve really won the lottery.

Walking as a pilgrim also provides infinite free time to think and dream. I am not having visions or thoughts on the level of Shirley McLaine by any means, but some combination of walking, fatigue, and the Spanish countryside has ignited my imagination to be much more vivid and real than when it was bogged in daily stresses at home. Usually my thoughts are most free in the morning, before the fatigue sets in, and they shift towards juvenile “are we there yet?” Complaints in the afternoon. I do my best to keep these thoughts to myself and shift to more positive thinking, but some days are easier than others. We have arrived in Carrion at lovely hostel next to a church run by very friendly Spanish nuns- you can add the small cup of tea they immediately offered us to the list if little things that are to be appreciated. Buen Camino!