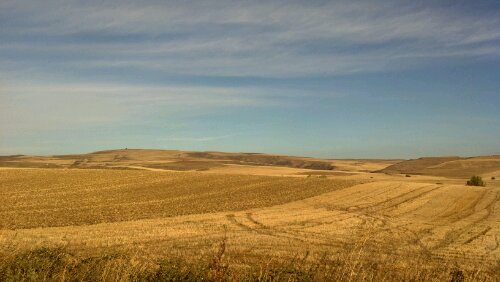 Slow and steady set the pace from Belarodo. Instead of just my left achilles aching, all parts of my body below the shin ached. But the wind stopped, bringing in chilly air. I was grateful for my fleece as I let my mind leisurely wander as I walked several feet behind my traveling companions. The way finally returned to some more picturesque scenery and less waving truckers. We stopped a few times for breaks and didn’t finish our lunch of bread and cheese until 230, with still another 6k so until we met our
destination. It was only then that we consulted our guidebook (now affectionately referred to as “beardy”) and realized there were only 70 beds in San Juan –  130 less than the number of beds in Belarodo, and we had watched many pilgrims pass us on our breaks. We then realized we hadn’t seen anyone pass for at least 20 minutes, a rarity on the crowded Camino. I became immediately convinced we wouldn’t get a bed and would either end up at an expensive hotel, trekking several  more kilometers to the village, or worst, outside sleeping in the cold (perhaps even after trekking to the next village).

However, none of those things happened. We got beds in the albergue- there were even bottom bunks available; it was the first time I hadnt had to sleep 5 ft in the air and worry about awakening my bedmate below to use the bathroom in the middle of the night (the downside of staying ultra-hydrated). What is even more remarkable to me is that the hour of my walking to San Juan convinced there would be no beds was perhaps the first time I  felt truly stressed since arriving safely at the albergue in Roncesvalles. (Though I was plenty stressed about getting there!)

Reflection on this episode brings two thoughts. One, that stress is useless. While rushing to get there, we were racing past invisible pilgrims and pushing our natural pace, much to the displeasure of our weary bodies. Yet, there was no need. If we had had  to find a hotel or walk to the next village or even sleep outside, we would have survived to walk the next day. Stressing about it did nothing to help the imagined problem. Second, it reminded me of how pleasant walking is. Yes, I have felt my fair share of aches and pain, and felt occasional worry about pains developing into injury.But if it has taken until day 11 to become mentally stressed in the familiar way I often approached situations in college, that’s remarkable.

We made it from San Juan to Burgos equally if not more slowly than the day before; we’d given up the race and allowed our bodies to set the pace. Today, we are gleefully hiding from the bleak weather and resting our bones by taking our second rest day in Burgos exploring the sites and delicacies in the many cafes. 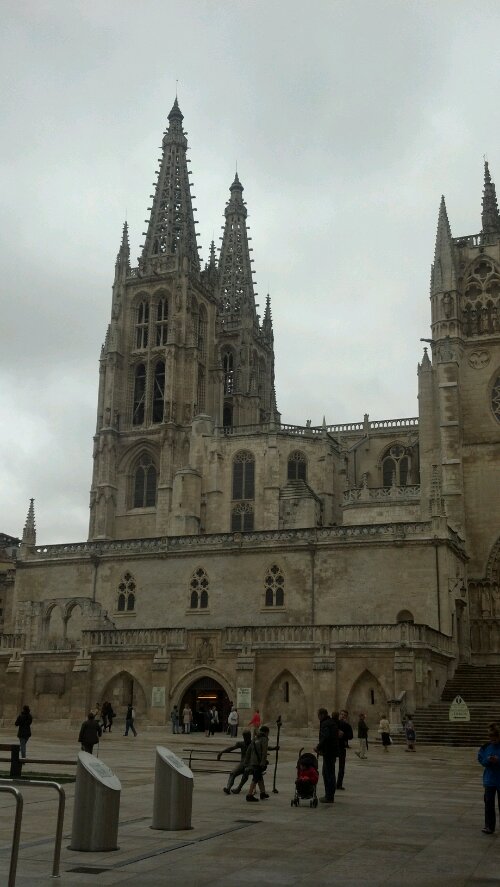 The cathedral in Burgos.

Hope all is well!